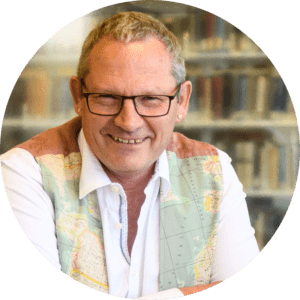 James has four decades’ experience in weather and climate research. His main field is large-scale climate variability, including the El Niño-Southern Oscillation cycle, the Southern Hemisphere westerly winds, and the impacts of climate variability and change on the Pacific, New Zealand and the Antarctic.

James was a lead author for the last two Assessment Reports of the Intergovernmental Panel on Climate Change (IPCC), and is a Coordinating Lead Author for the 6th IPCC Assessment to be published in 2021.

He was awarded the Prime Minister’s 2018 prize for Science Communication, and has recently been appointed to the New Zealand Climate Change Commission. 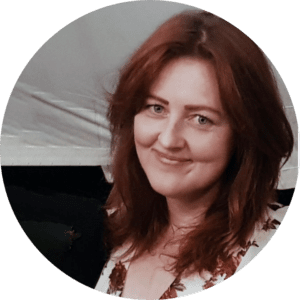 Mahina-a-rangi is passionate about enabling mana whenua involvement in environmental decision-making and supporting kaitiakitanga, particularly around relationships with catchments. She is an environmental planning expert, who has just completed a PhD in catchment modelling from a Māori knowledge perspective.

She is currently the Pou Takawaenga Taiao, Environment Manager for Ātiawa ki Whakarongotai and is a Pūkenga, Lecturer at Te Wānanga o Raukawa, for the Poutuarongo Kaitiakitanga Pūtaiao Programme.

She also holds several positions on forums advising Ministers on issues relevant to climate change adaption and resiliency. These include her roles in the Kāhui Wai Māori, the Māori Freshwater Advisory Group to the Minister for the Environment, advising the Ministry of Internal Affairs on the development of Taumata Arowai, the new Three Waters regulator, and as a member of the Minister of Health’s Drinking Water Advisory Committee. 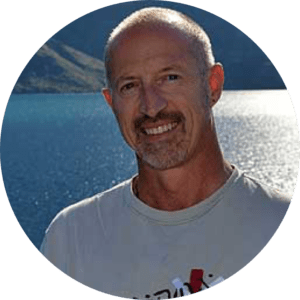 Bruce holds the EQC Chair in Resilience and Natural Hazards Planning at the School of People, Environment and Planning at Massey University. He has a multi-disciplinary education, with degrees in economics and agricultural economics, environmental science, and urban and environmental planning.

His research explores the role of governance in building resilient and sustainable communities, with a focus on coastal communities and the role of land-use planning, collaboration, conflict resolution, and science, policy and practice in managing natural hazard risks.

Dr Glavovic has been an invited member of a range of expert committees, review panels and conference organising committees on matters relating to natural hazards, coastal management and climate change. He has co-edited five books, including Oxford Research Encyclopedia of Natural Hazards Governance (2019); Climate Change and the Coast: Building Resilient Communities (2015); and Adapting to Climate Change: Lessons from Natural Hazards Planning (2014).

He was Project Manager of the team that designed and facilitated the process that culminated in South Africa’s White Paper for Sustainable Coastal Development (2000) and the world’s first Integrated Coastal Management Act (2009). 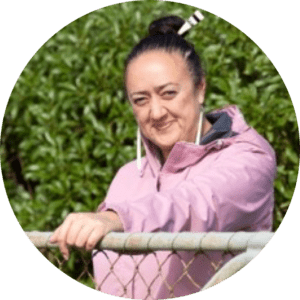 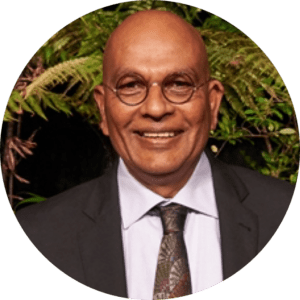 Born in Kuala Lumpur, Mayor Gurunathan initially came to Wellington in the 1970s to attend university and obtained a degree in political studies.

Returning to Malaysia with his New Zealand wife Claire in the mid-1980s, Guru spent several years as a senior journalist and well-known political commentator. In 1995 he returned to New Zealand on the Kāpiti Coast.

Working as a reporter/journalist and a councillor, Mayor Guru established deep connections within the Kāpiti community and assumed office as Mayor in 2016 and was re-elected for a second term in 2019. 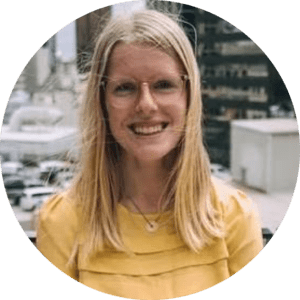 Sophie Handford is the Paekākāriki-Raumati Ward Councillor at Kāpiti Coast District Council and the National Coordinator of School Strike 4 Climate in NZ. Sophie is 19 years of age and graduated Kapiti College in 2018 where she was Head Girl and heavily involved in with the Eco Action Group and Girl Up. This year, she is on the World Oceans Day Youth Council and is the Youth MP for Kris Faafoi. She works at Enviroschools and the GO Club, a science and technology group for girls aged 6–12. 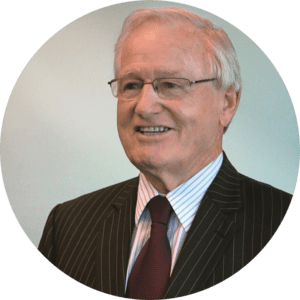 Rt Hon James Bolger was Prime Minister of New Zealand from October 1990 to December 1997. During his 25-year career in politics he led the National Party for almost 12 years, was a Minister for 16 years and had three consecutive terms as the country’s head of government.

He is a member of the Order of New Zealand (ONZ) and a former Ambassador to the United States. He currently holds a number of key governance roles including Chairman of the International Advisory Board of the World Agricultural Forum and Chairman of the Gas Industry Company Limited.

He is also a member of the Te Uruwera Board and a Treaty Negotiations consultant. He was the Chancellor of the University of Waikato from 2007 to June 2019 and was Chairman of Mt Cook Alpine Salmond Ltd, NZ Post, Kiwibank and KiwiRail among other companies. 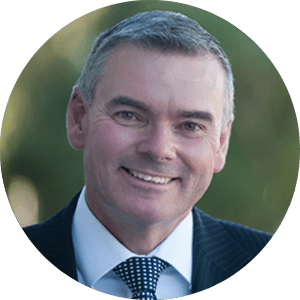 He is also Deputy Chair of the Environment select committee.

In the last parliament he represented the National Party on the Executive of the New Zealand chapter of GLOBE, a cross party grouping of MPs focussed on climate change issues.

He was involved in the collaboration that led to the publication of the Vivid Economics report titled Net zero in New Zealand: Scenarios to achieve domestic emissions neutrality in the second half of the century.

Prior to entering Parliament, he was CEO of the nationwide children’s charity Make-A-Wish New Zealand. 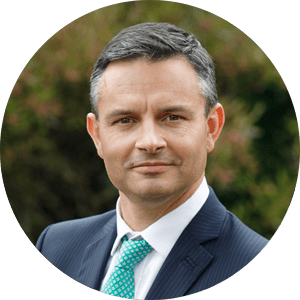 New Zealand can lead the world in transitioning to a high-value, clean-tech, post-carbon economy that works for everyone. It’s one of the many reasons James joined the Green Party in 1990.

Prior to becoming an MP, James had a successful career in management consulting, primarily in London, where he lived from 1998 to 2010. James worked with large, multinational companies across Europe and around the world, helping them develop more sustainable business practices.

While studying in the United Kingdom for a Master’s degree in sustainable development and business leadership, James realised that the private sector alone wasn’t able to affect change at the speed and scale necessary to meet the great challenges of our time.

James’ diverse business experience and expertise, from working for multinational corporates through to local start-ups, social enterprises and community organisations, has enabled him to lead the Green Party, the Government and New Zealanders towards a high-tech post-carbon economy and society. 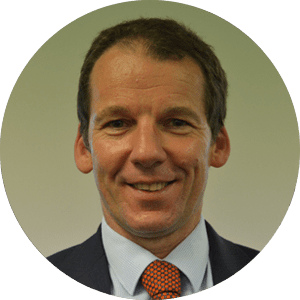 John Lucas started with the Insurance Council in 1996 as Insurance Manager responsible for facilitating a number of the Councils technical working committees and takes the leading role in coordinating the industry response to an Insurance emergency event and is the Councils spokesperson for property, marine and motor insurance issues.

John is presently assisting the Insurance Council with community messaging about property and business resilience from the effects of climate change, seismic events and flammable building materials.

John began his insurance career with NZI in the early eighties specialising in farm insurance and commercial property underwriting. He made a move to the UK where he worked for a number broker firms and eventually began specialising in insolvency insurance placement both in the London and the Sydney markets. 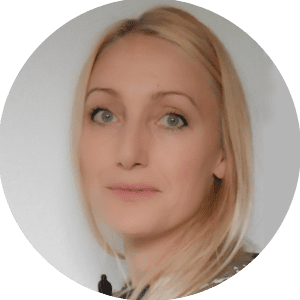 Since moving to New Zealand, Lyndsey’s career has been spent working at The Office of Treaty Settlements/ Te Arawhiti advising central government on the Ngāpuhi Deed of Mandate, Te Ātiawa (Taranaki) Deed of Settlement, Office of Treaty Settlements Work Programme Manager and The Marine and Coastal Area (Takutai Moana) Act, as Māori development Manager for a national NGO and more recently with The State Services Commission/ Te Kawa Mataaho.

More information on the Summit 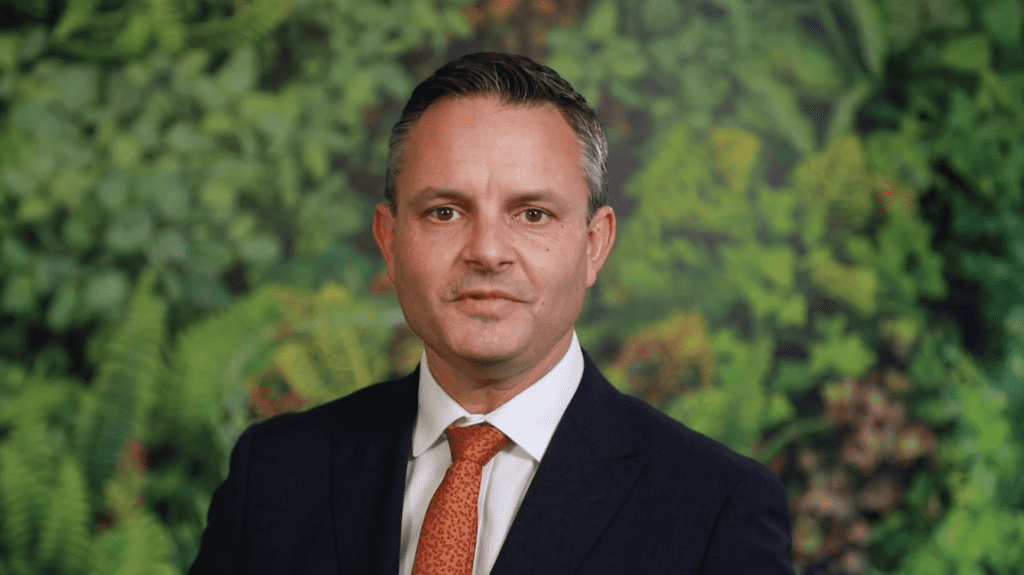 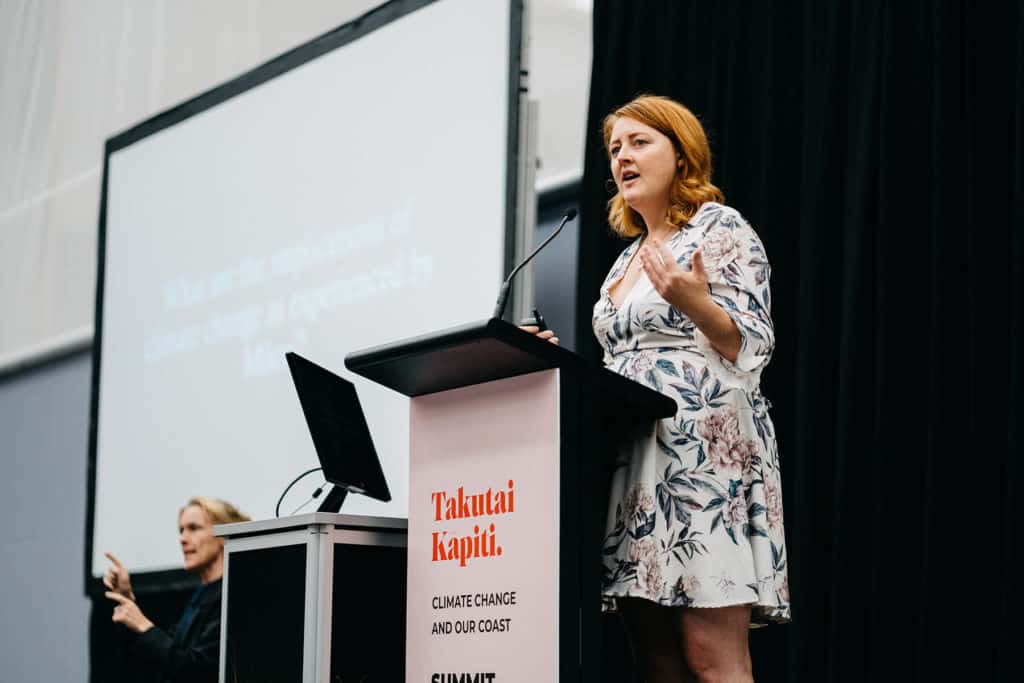 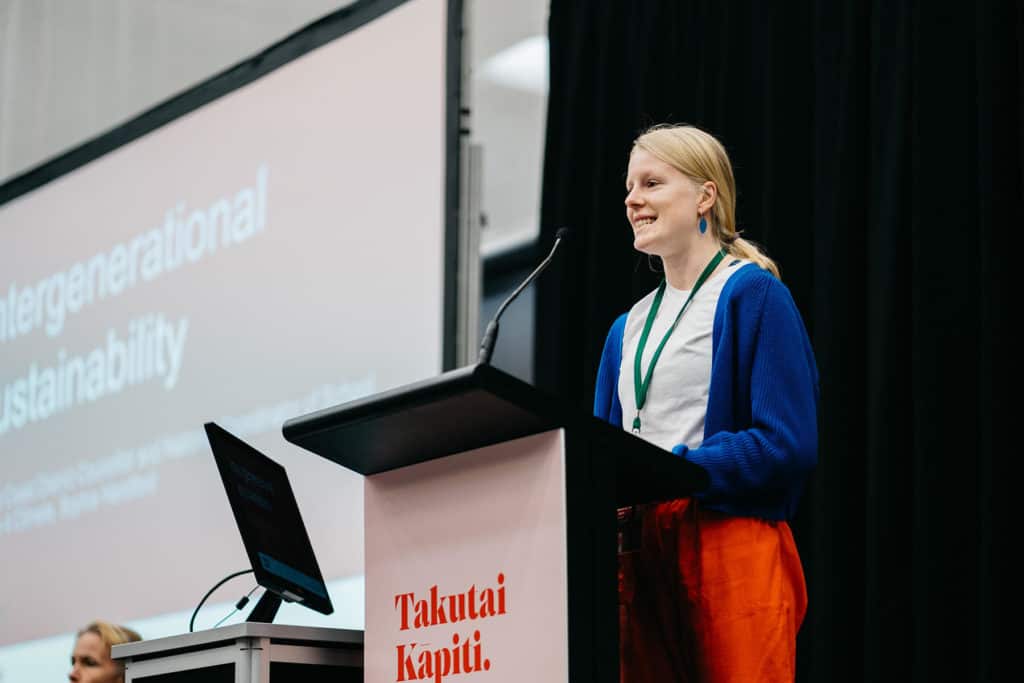 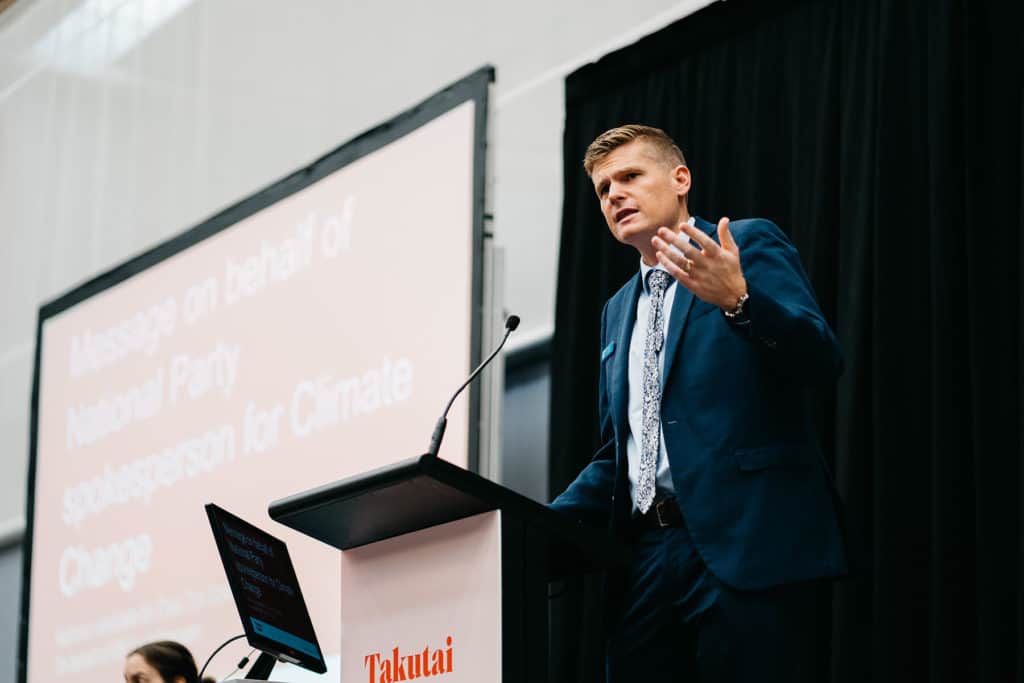 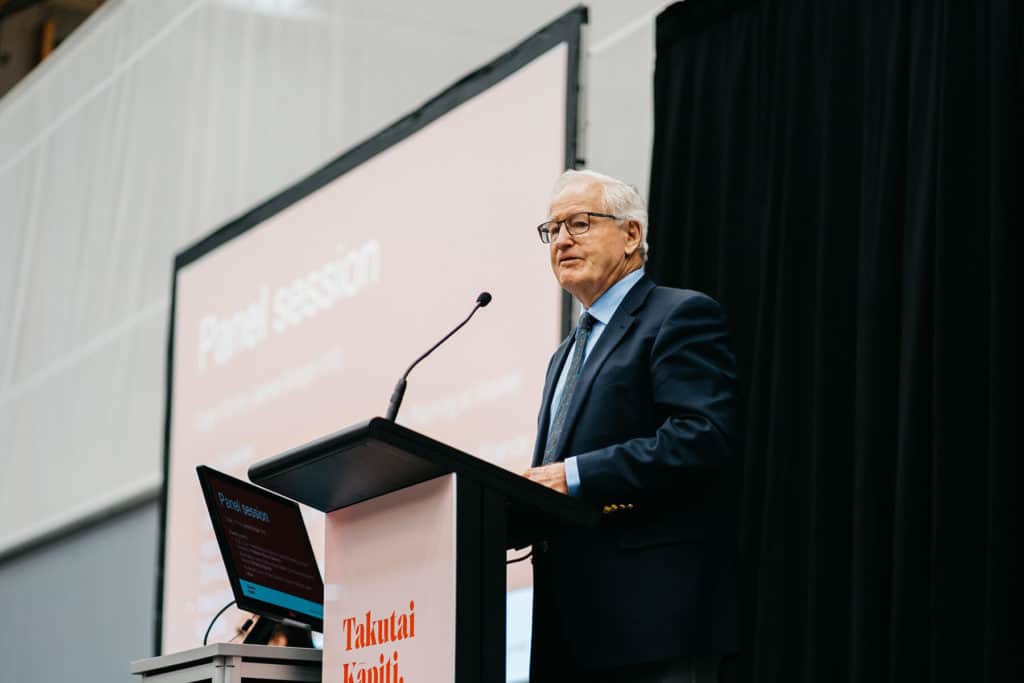 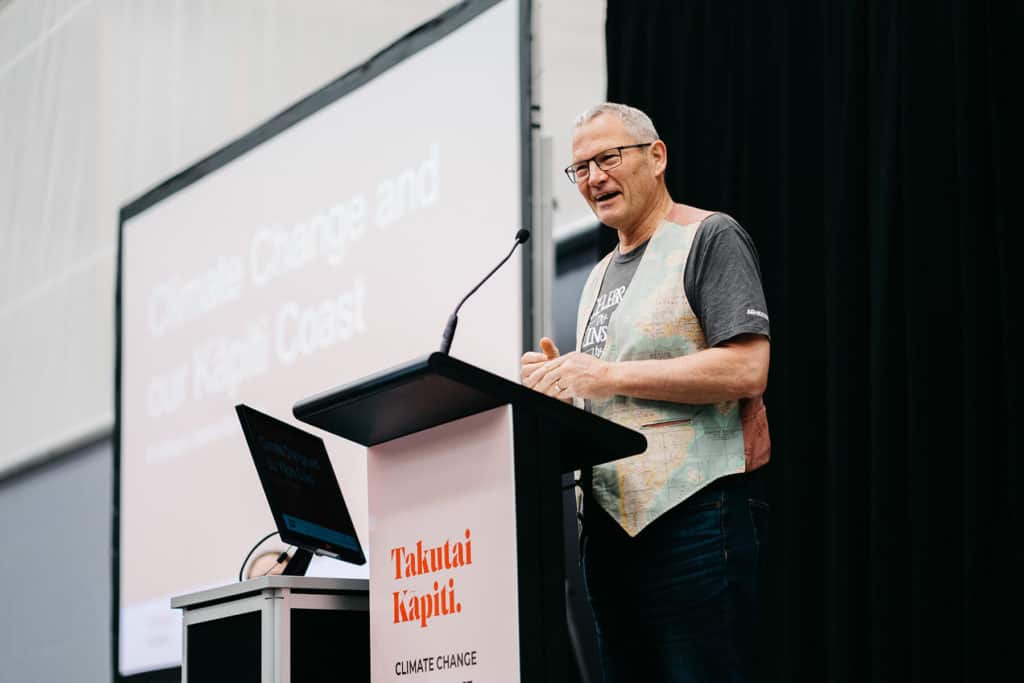 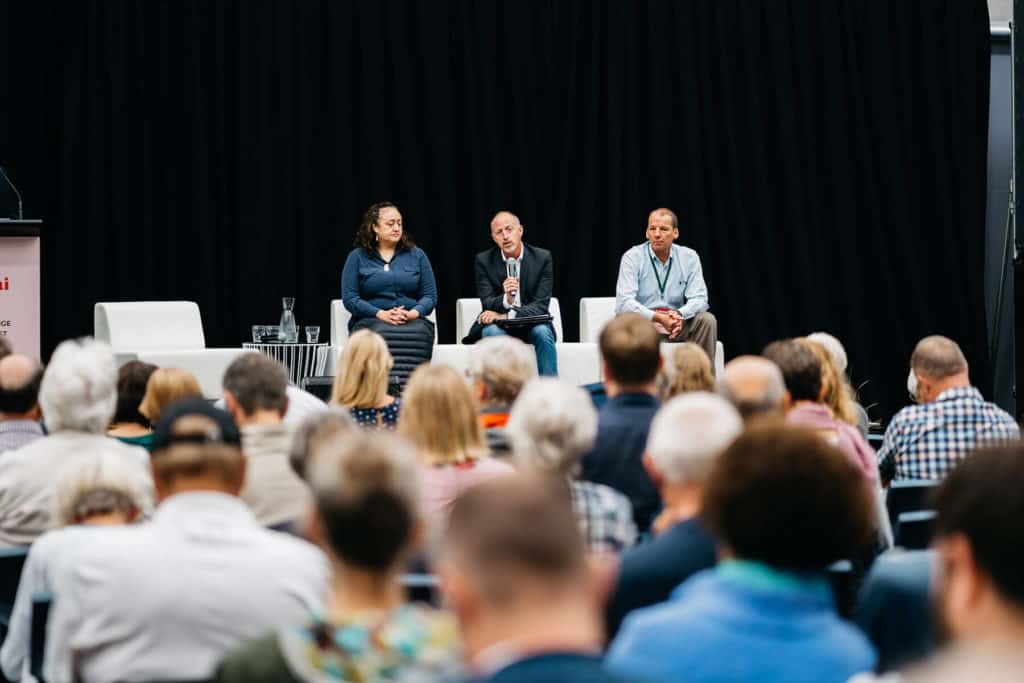 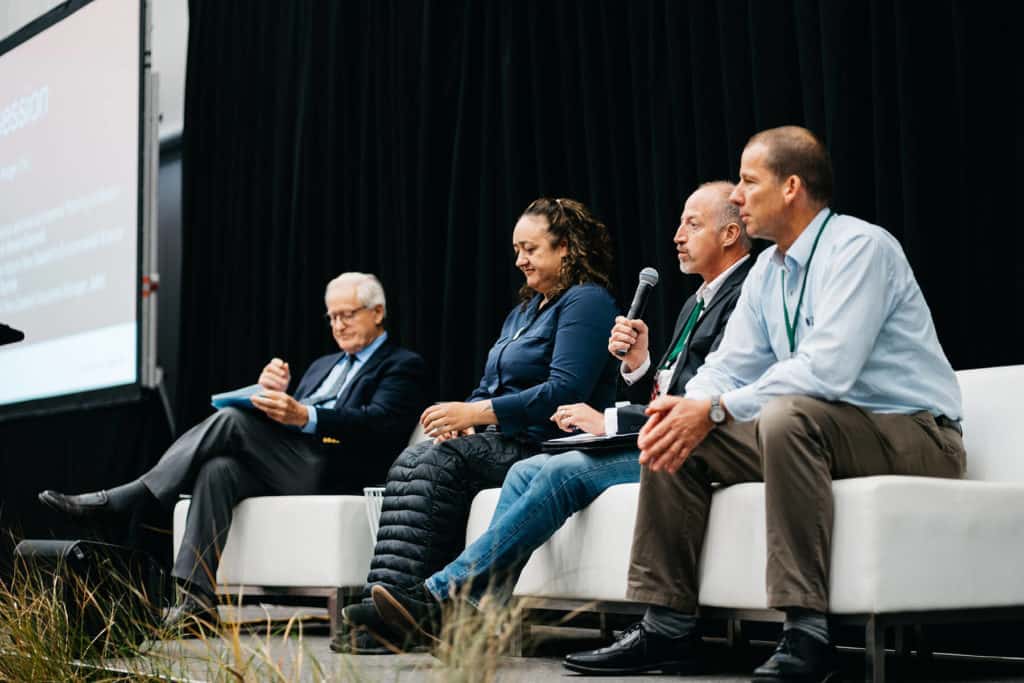 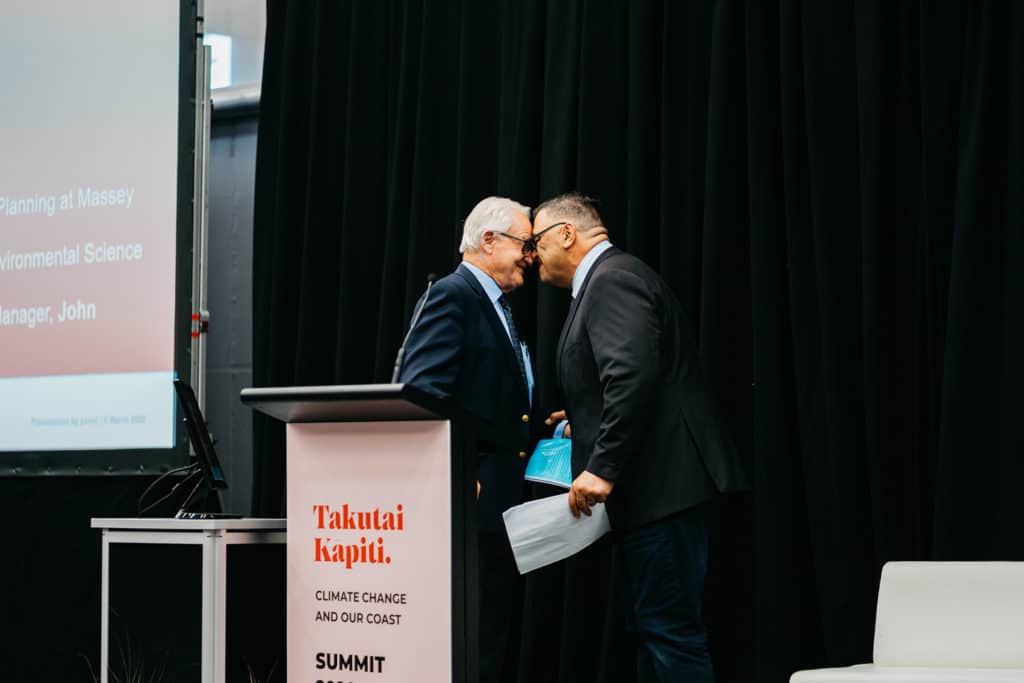 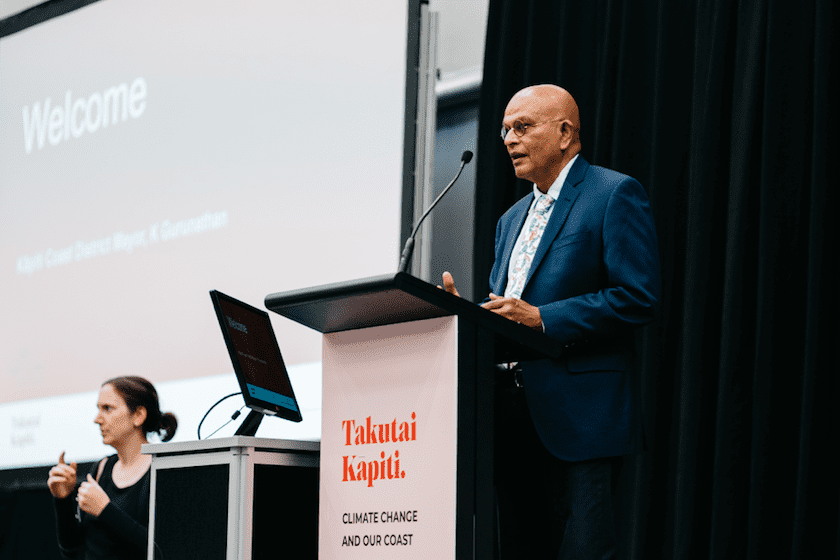 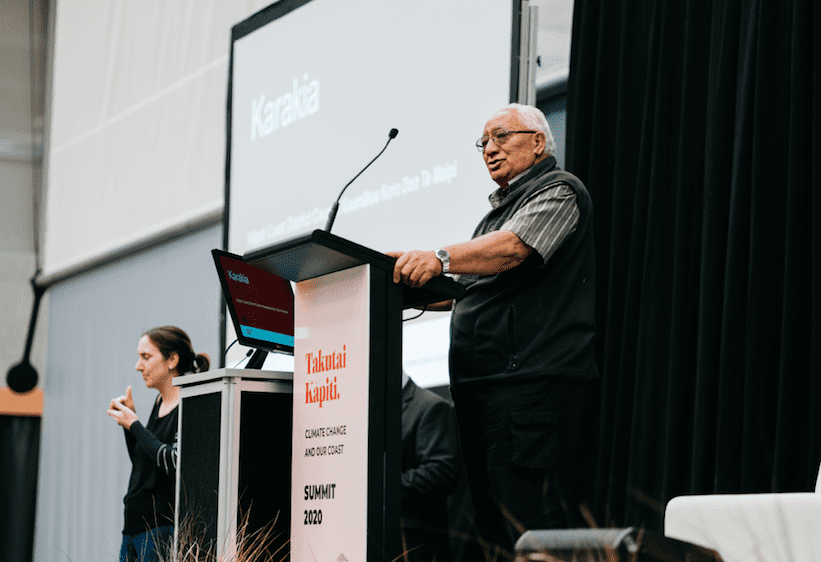 Our speakers tent was hosted by Councillor Handford and provided opportunities to hear presentations from:

“As kaitiaki and tangata whenua of the district, our focus is on ensuring that our footsteps in the environment have a positive influence for our future generations. Our traditional practice of kaitiakitanga has developed from centuries of observation and experience and knowledge handed down from our ancestors.” 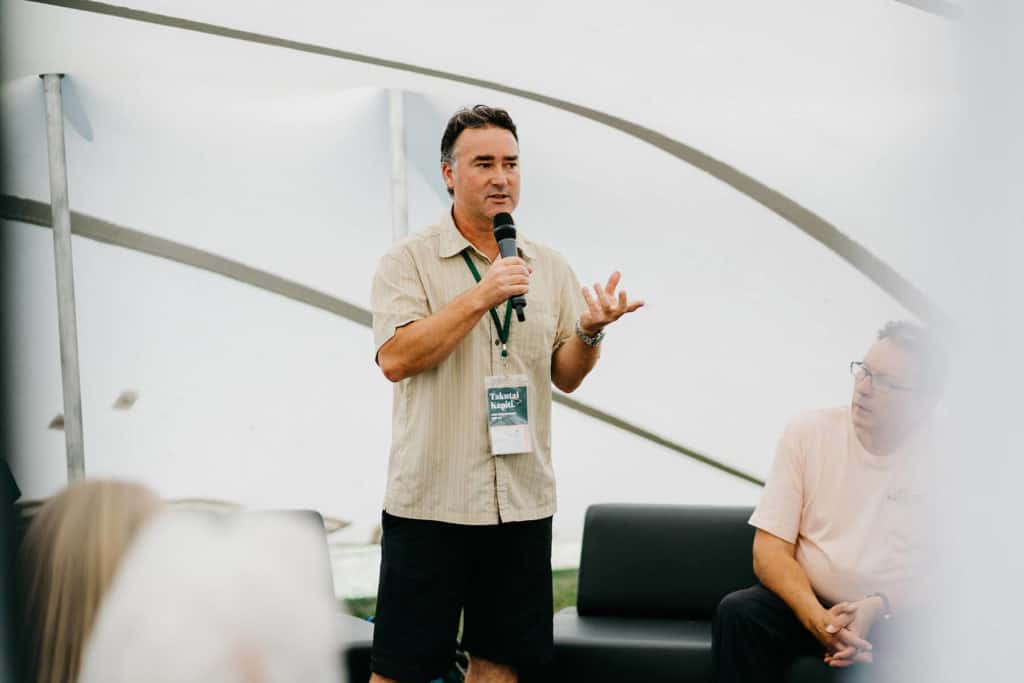 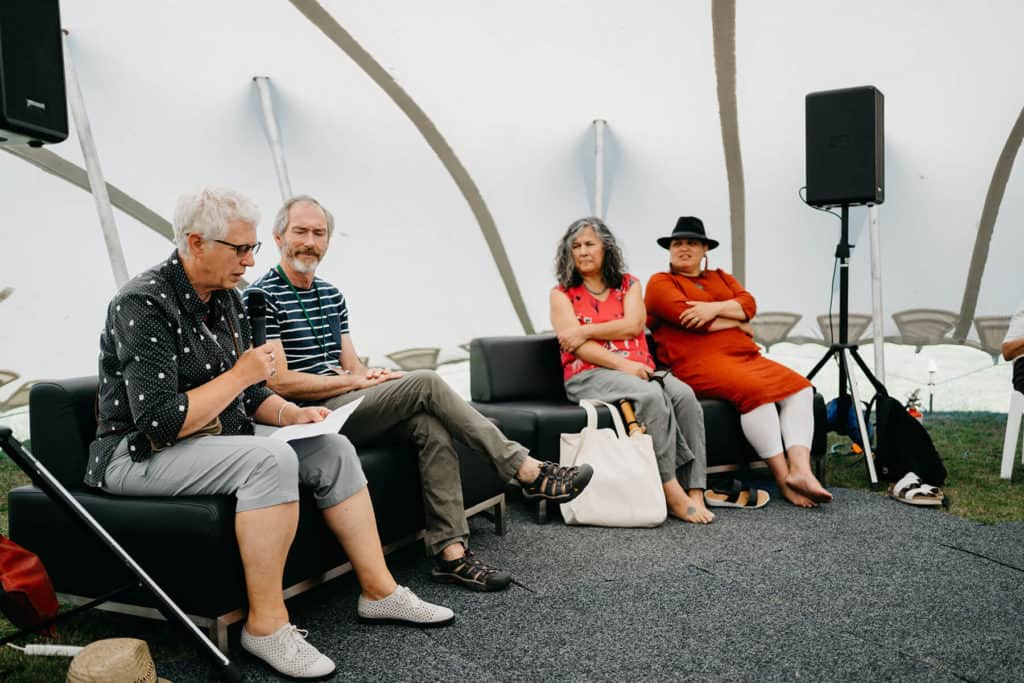 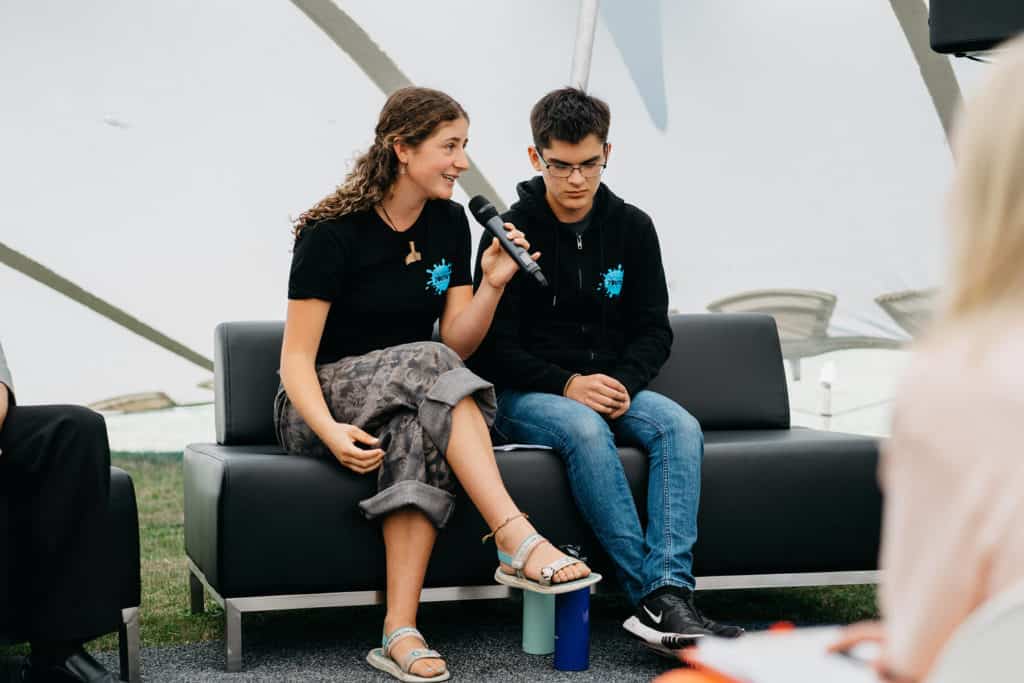 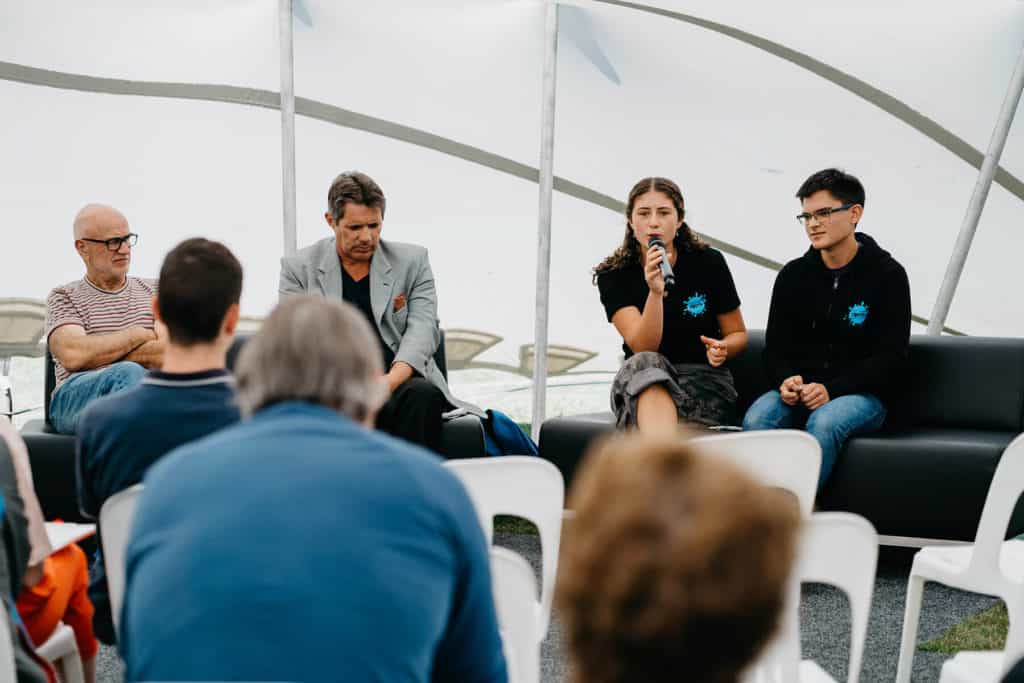 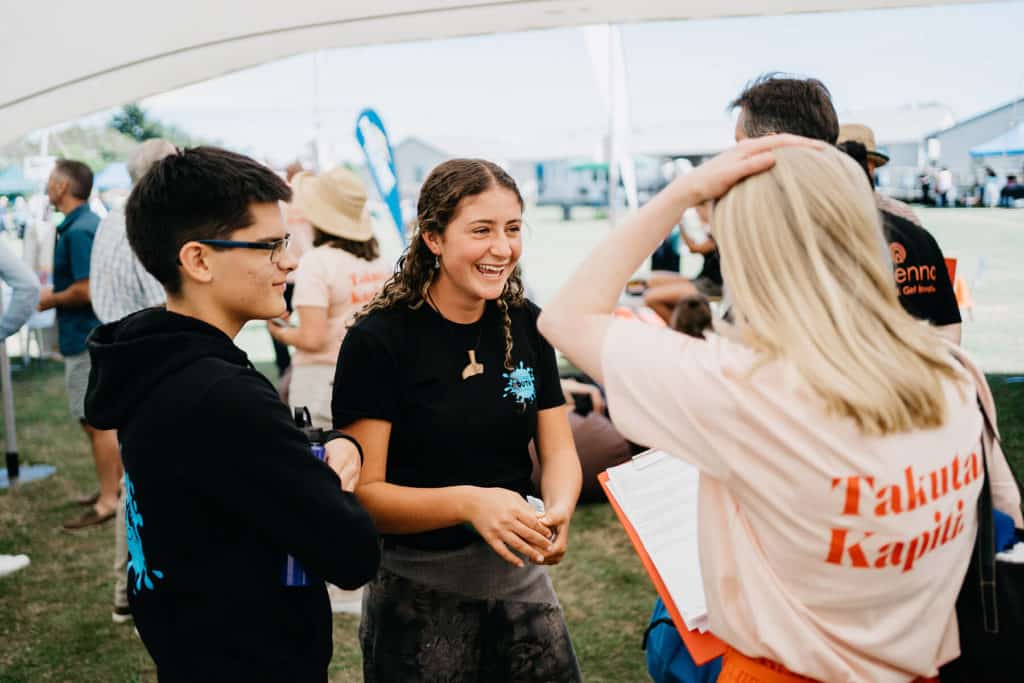 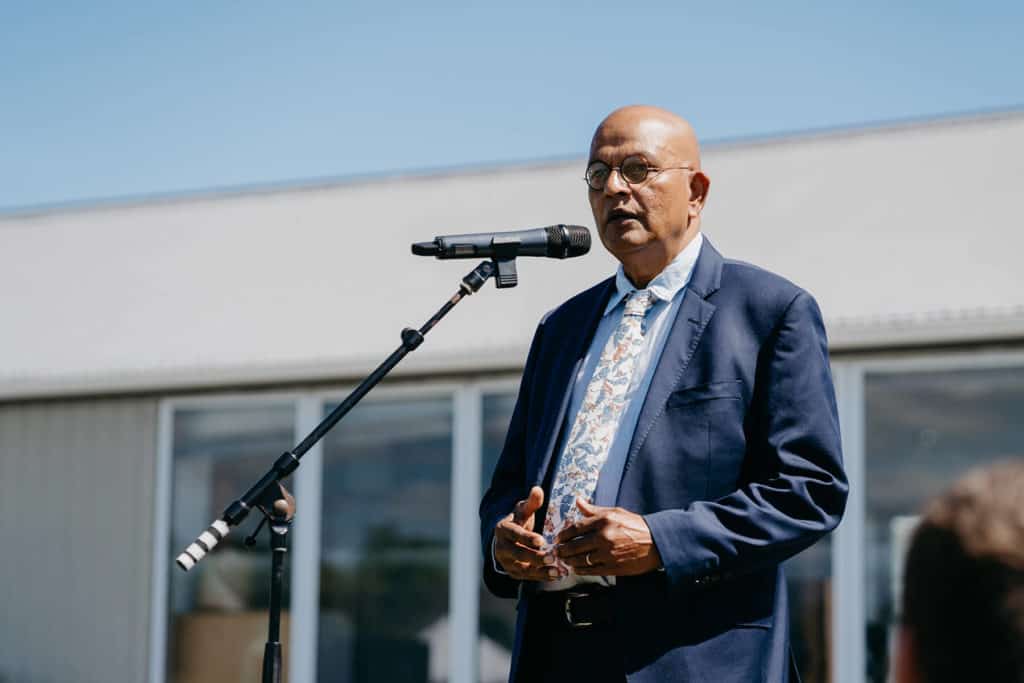 More information on the Summit